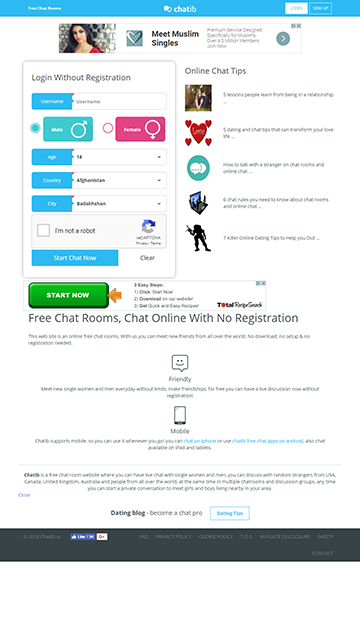 Free Chat Rooms Online With No Registration 2016, you can enter and start chat without registration, 100% free chat

When accessing Chatib from Google, I can honestly say that I didn’t know what to expect. I was a little discouraged when I had to verify that I wasn’t a bot before even landing on the homepage. The site doesn’t require registration, and gives chat and online dating tips. It also shows that the site supports mobile chat. That is a great thing for the on the go chatter.

Signing in was easy, and the site wasn’t bad. It’s family friendly, and is very easy to use. You just go in and chat. I got a few private messages right off the bat, which threw me off a bit, I am 90% sure these were bots.

The rooms smaller, and the conversation is slow, I couldn’t see any moderators, but the lack of adult content shows me that they are there and that the site itself is well moderated. As far as media is concerned, there is none. If you are looking to cam chat or to use audio, this isn’t the place for you.

While I was really getting into the chatting, the site itself actually crashed on me. I don’t know if this is a frequent thing, but it can be annoying to any normal chatter just trying to get out there. In trying to reload the site is still not back up yet so I am only going to be able to give my initial thoughts.

General chat was nice. There were regular chatters participating, few bots and no trolling going on. While it was a bit of a slower chat than most, a newer chatter may like the pace. There are no bells or whistles to this chat. It’s just a basic chat. I Chatib is primarily a private messaging system rather than a set of community chat rooms.

I looked into three other rooms that were said to have the next largest populations, and none of them were busy. One or two of them had some “hi’s” speckled here and there, but other than that there wasn’t much to it. I honestly liked it better when it was just ultimate private messaging.

The site itself isn’t poorly constructed, but it’s just too slow for me. It would be a great site for newer chatters, but at the pace it is going now, I don’t see any longevity in it. You would be better off starting your chatting experience at a site that moves faster and can grow with you.